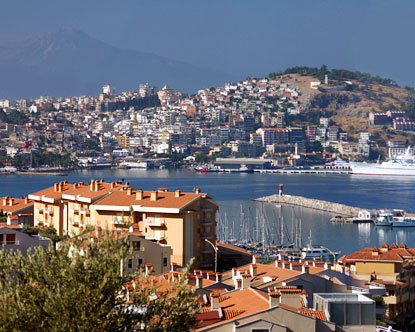 If you rent a Sailing Yacht from one of our several Bases throughout the Aegean Islands, you may even reach the Turkish Coasts sailing around the magical coves and sandy beaches of the Eastern Aegean Islands...

Offering all modern facilities, Marmaris also retains traditional color and customs. Bazaars can be found here offering a wide variety of merchandise. There is also a fishing village that shelters yachts all year round, located in a beautiful port with pines reaching down to the sea beaches. Sights. Byzantine castle, archaeological finds.

In ancient times, this was known as Apollo's city, with the ruins of his Temple con- trasting the modern life of the city.

Quiet and picturesque with beautiful beaches in secluded bays.

Ruins reveal that Kusadasi was inhabited during the Hellenistic, Roman and Medieval periods. Today it boasts a lively nightlife and shopping district to attract tourists

Knidos is an ancient city containing remains of the Temple of Venus and a Byzantine church Green and peaceful it is a "must see" for lovers of antiquity.

Only one mile away from the Turkish coast, Samos is a totally green island with marvellous landscaping, and springs and waterfalls cascading either to the mainland or bays with crystal clear waters. Fishing villages and ancient monuments as well as the warm and friendly inhabitants await visitors Sights. Museums, Roman finds Delicacies: Local dishes and wines.

Well known as "Alikarnassos" in ancient times, Bodrum is home to one of the Seven Wonders of the World, as well as many other remains of her long history Today, it is a very lively city, and this fact. along with such monuments from the past. attracts many visitors. Sights. Castles, towers, mausoleum, archaeological finds

Built on top of the ancient city of lasos, the bay remains tranquil with beautiful

This is a mountainous yet fertile island with pines, olive and fruit trees, inhabited by quiet. friendly people. There are fishing villages, natural springs, and secluded bays with beautiful pebble beaches