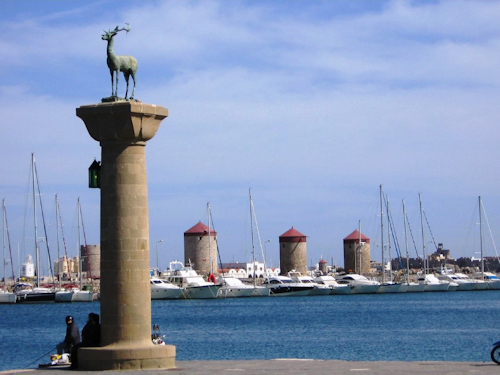 Moving further away from Athens the endless coastlines of the Central Aegean islands will defin itely please and fascinate even the most demanding visitor...

"The Jerusalem of the Aegean", where St.. John wrote the Revelation of Apocalypse. The emperor Alexios Komninos built a holy monastery in St. John's honor, which is the landmark of the island The majestic fortress -monastery crowns the hills above the port. it is surrounded by dazzling white, cube like houses, which spill down ?ls an&#0;&#0;. &#0;&#0;ghts Monasteries with Byzantine icons, 9th century embroideries, rare old books.

A group of islands with beautiful sandy beaches and translucent waters. The hamlet on the natural harbor is composed of spotless white washed houses, tavernas, ouzeri and coffee houses

A mountainous island, with an indented coastline concealing numerous delightful coves, it resembles two islands joined by a ribbon of land only 105 m. wide. The main village is built up the side of a steep hill and presided over by the massive, austere remains of a Venetian castle" A row of wind- mills and closely packed white cube houses follow the contours of the hill in an unbroken band down to the sea. Sights" Venetian castle, churches, windmills"

Volcanic, dark and picturesque, this island is contrasted by the whiteness of its houses and the bright colors of their doors and windows. Charming villages perch on the crest of the hills above crystal waters and lovely beaches" Sights: Castles, churches and traditional houses.

This small island captures the imagination of visitors because a prehistoric dwarf elephant once lived there, Beautiful beaches, monasteries and the ancient town within the capitol will amaze visitors.

Has been a wealthy island since antiquity, judging from the coins found here Visitors will be amazed by the stone houses built in tiers like an amphitheatre, the medieval castle occupying the site of the ancient acropolis and the wonderful beaches. gained fame from the Lady of Ro, who raised the Greek flag every morning for 40 years until she passed away

Splendid beaches, varied vegetation, numerous cultural sites, and the largest medieval and ancient town make Rhodes undoubtedly the most attractive of the Dodecaneses islands. Sights: Castle of the Grand Masters, the Valley of the Butterflies, temples, centuries-old houses, the famous town of Lindos.

A mountainous island, with most settlements on the relatively flat south side Modern architecture is combined with traditional style in both the exterior and interior of the houses Villages that have been inhabit- ed since the 10'h century, help make citizens take pride in maintaining their traditions. The citizens still speak a dialect that contains several Dorian words and idioms. Sights. Ancient ruins.

Inhabited since prehistoric times, Kastelorizo has areas where Dorian ruins can still be seen. Traditional color and wonderful beaches abound on both islands. The island of Ro

A mountainous island with a steep, rocky coastline and few pleasant beaches. The island established its own merchant fleet and grew rich from trade in the 18'" century. Sights. Churches, caves.