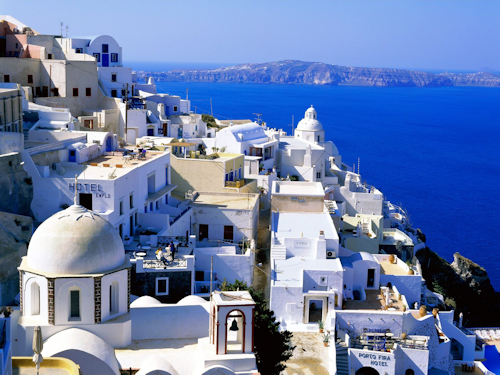 Definitely the Hotspot of Greek Islands... From Athens to Syros, Paros, Mykonos and Santorini the options are endless for each type of Sailing vacations...

The Temple of Poseidon with its Doric columns, built in 5th century B.C. makes this cape well known worldwide. It is usually a stop during itineraries to the Cyclades Islands, where passengers enjoy a swim in the clear waters

This northernmost and second largest of the Cyclades islands is also among the most beautiful ones. There are successive ranges of mountains with steep sides, rivers and mineral springs with famous sparkling medicinal waters, large valleys planted with olive, fig, orange and lemon trees as well as grape vines. Andros is a blend of rocky and green landscaping with superb beaches. Sights Archaeological museum with finds from the Geometric, Classical, Roman and Byzantine periods, Museum of Modern Art, Nautical Museum, monasteries, Geometric and Byzantine temples, Andros town with neoclassical mansions. Delicacies. Almond pastries

The Holy Island of Virgin Mary, where pilgrims come to pray or fulfill a vow. There are beautiful villages on the slopes of a line of mountains whose highest peak was the home of the Wind God Aeolus in Greek mythology. There are also numerous coves along the coast with sandy or pebbly beaches. Sights. Church of Virgin Mary with the miracle icon, Archaeological Museum, Gallery of Greek painters, ruins of medieval castles. Delicacies Local wines.

The capital, Hermoupoli, which is also the main harbor, stands on a natural amphitheater site with neo-classic buildings, old mansions and white houses cascading down to the harbor. The varied landscape makes the hinterland outstanding, while the coastline is indented with beautiful inlets of all sizes nestled between capes Sights Archaeological finds, Town Hall built by Ziller in 1876, Apollo Municipal Theater which is a copy in miniature of La Scala in Milan, monasteries, unique architecture, casino. Delicacies. "Loukoumi" and "chalvadopita" delights from egg white, sugar and almonds.

A world famous island, attracting visitors from around the globe, including wellknown artists and intellectuals. They are attracted by the more than twenty sandy beaches with clear waters for delightful swimming. Visitors also enjoy wandering along the whitewashed narrow streets with brilliant white box-shaped houses adomed with bright colored doors and balconies and stepped walls for sitting on. After a leisurely day enjoing the quiet private corners of the island, ordinary vacationers nestle happily side-by-side with the jet set and yacht setters in the numerous bars and discos with their nightlife and sounds that never end. Beach parties, happenings, and fashion shows take place every summer, or if they choose, visitors can still find quiet places for a tranquil afternoon Sights Aegean Nautical museum, over a hundred small churches, the Agricultural Museum housed in a converted windmill. Delicacies "Kopanico", a pepper flavor white cheese, " Amygdalota" almond delights, and "soumada", fermented almond cordial.

Uninhabited today, this is the sacred island birthplace of the God Apollo and Goddess Artemis of Greek mythology This vast archaeological site whose superb monu- ments cover almost the entire island, reflects the wealth and beauty of its ancient way of life. Sights. Archaeological museum, Hermes House, Sacred Way of Lions, Sanctuary of Artemis, Sanctuary of Apollo, Agora of the Italians, Sacred lake with the Terrace of the Lions, Theatre Houses, Stadium, Gymnasium, along with many others

An attractive island, popular not only for its numerous excellent sandy beaches and blue clear waters, its wild rocky landscape with white box-shaped houses whose yards are filled with basil, jasmine, honeysuckle and bougainvillea, but also for its nightlife Paros is ideal not only for those in search of cosmopol- itan bustle, but also for lovers of solitude Sights. Picturesque Venetian castles, the famous church of Ekatondapiliani which is a Byzantine monument, monasteries, exhibition of traditional crafts, Ornamental pottery and fine silver jewelry. Delicacies. Wine and olive oil.

This island of the ancient poets offers a land- scape of vineyards and olive trees that wind down the mountains to the crystal clear sea and its superb sandy beaches. The beautiful capitol with its white cubic houses and row of windmills also offers visitors lively nightlife. Sights Archaeological and Folklorik Museum, Museum of Modern Art, numerous churches.

From a distance this island looks like an isolated rock in the ocean Her green valleys with white churches, beautiful secluded beaches and monasteries make her a jewel of the Cyclades Sights Monasteries, churches.

This best known island in Greece is the home of a huge volcano that erupted, leaving the town perched high on its famous white cliffs The only way to reach the city is by donkey, walking up the 587 narrow steps to the top, or by cableway The sea approach to the island is spec- tacular! Black sandy beaches, cliff side towns and bright white houses make Santorini an island of contrast and undoubtedly a must for travellers.

Thirassia was formed by volcanic activity and today has a single village built on top. There are tavern as offering local wine and traditional hospitality to visitors.

An exceptionally picturesque island with small valleys nestled between mountain ranges. The valleys are sparsely planted with vines and fruit trees, and open into pretty little bays They are dotted with miniature chapels, windmills, monasteries and flowered slopes Beautiful villages built on top of the hills offer a breathtaking view Visitors should make sure to visit the port of Korissia and the remains of the Temple of Smithian Apollo. Sights. Archaeological Museum, monasteries Delicacies Fresh fish.

Famous since ancient times for the "Constitution" by Aristotle, Kythnos is a typically Cycladic island. Vineyards and fig trees provide dashes of green against the white Cycladic cottages and churches with their frescos and icons that cling to the hillsides above beautiful small bays with clear waters Sights. Monasteries, churches, Loutra village with radioactive thermal springs beneficial to sufferers of arthritis, dermatitis and other diseases.

An earthly paradise with clear blue waters touching the barren landscape. The silent rocks, the small coves along the coastline, the chance to escape from the crowds all attract visitors to these virtually unblemished islands. Sights Archaeological finds, remains of Roman buildings

As blindingly white as the chalk it produces, Kimolos was used by pirates in the Middle Ages due to its caves that are well-con- cealed among the superb beaches with sparkling clear waters. Sights Remains of castles, churches

Notable for its volcanic soil and the rich deposits of minerals beneath, Milos owes its fame in part to the "Venus de Milo", a statue now exhibited in the Louvre Museum in Paris Milos fascinates visitors with her monuments, her charming white villages, her extraordinary beaches with crystal waters and her strange rocky formations Sights Catacombs, Historical and Folklore Museum, Archaeological finds.

Bare, undulating hills interspersed with small fertile valleys cover this charming island with colorful churches. The rocky coast- line is deeply indented with a succession of coves and bays. The curious rock formations resemble human figures, which call to mind the myth of Medusa, Danae and Perseus, as if these prehistoric inhabitants of the island had been turned to stone Sights. Venetian castle, Monastery and fortress of the Archangels of the 18th century, churches of the 10th century Delicacies. "Baklava" and other pastries

A gray landscape of rock that will surprise visitors as they discover the beautiful spots inland, which together with the island's superb architecture, rank it among the jewels of the Aegean. Famous in ancient times for her wealth, which came from gold and silver mines, she enjoyed great prosperity in Classic times as well. Sights: Archaeological Museum, monasteries, over 365 churches, castle area, wind- mills. Shopping Pottery, folklore souvenirs Delicacies Baked chickpeas, "Myzithra" cheese.